Self-Hatred? How Do We Heal? 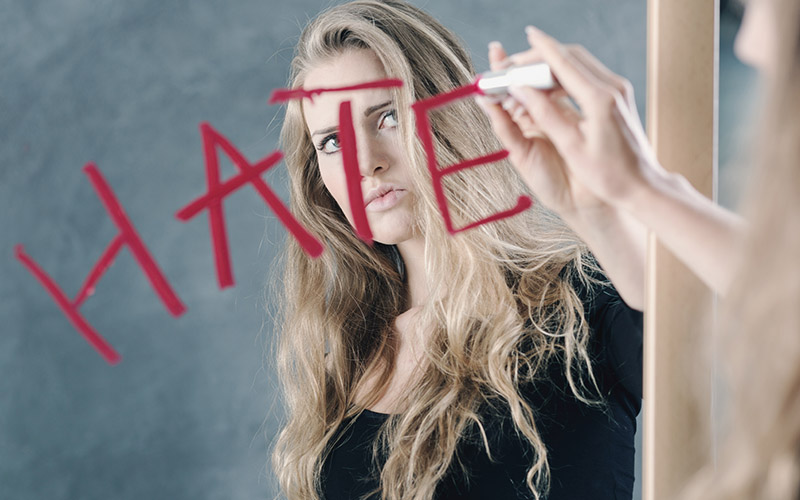 Healing the Roots of Self-Hatred

The Critic is a common and unfortunate constant in our inner lives. This internalized voice, self-hatred, assumes the tone and language of our mother, father, religion and/or society. After every step forward there it is, doubting or damning our choice. But for many people, “critic” is much too mild a word.

The voice they hear is relentless, a vicious screaming that cripples and controls.

They might call their voice the “Self-Hater” or the “Killer Critic.” Not everyone hears self-hatred as a voice in their heads. Sometimes, it’s a way of being that manifests in myriad forms, including:

Where Does the Critic or Self-Hatred Come From?

In Embracing Your Inner Critic, Hal and Sidra Stone write that in order to protect us from the pain and shame of always being found “less than,” a voice develops within us “that echoes the concerns of our parents, our church or other people who were important to us in our early years.”

That voice, self hatred criticizes us before anyone else can.

Cheri Huber, author of There Is Nothing Wrong with You: Going Beyond Self-Hate, sees the culprit in child-rearing practices based on punishment. These practices, she says, teach us that we need to be punished in order to be good.

Because we believe that punishment is the path to goodness, we continue to do it to ourselves as adults.

Internalized shame from having been molested, neglected or abused as a child can create the most vicious forms of self-hatred. David was molested by his mother and lived constantly with a voice in his head that told him he was unworthy of life.

He used to silence that voice with alcohol and drugs. “Only when I was high,” he says, “did I have any peace.”

How Can I Get It to SHUT UP?

Understanding where the “Critic”originates is helpful, but then you have to ask, how can I get this voice to leave me alone? Many who have tried to argue or fight with or ignore it would attest to the futility of those tactics.

Here, instead, are three strategies that have helped others.

In There Is Nothing Wrong with You and its follow-up When You’re Falling, Dive, Huber lays out a process in which you learn to listen to and then disbelieve the voice—to unlearn the lie that something is wrong with you. When Crystal started listening with detachment, she was shocked to discover that her crushing voice thought it was helping her become a better person by screaming her “flaws.”

Both can be crucial for healing the childhood traumas that often give rise to the Self-Hater. David went on an antidepressant and started therapy. He found relief and detachment from the voice and realized that his self-hating voice jump-started his depression and addictions. Through therapy, he’s gradually coming to accept himself just as he is. He still hears the voice, but it doesn’t drive him to despair.

3. Understanding the Message Below

Hal and Sidra Stone recommend dialoguing with your Inner Critic—with a therapist or in your journal—in order to understand what it is trying to communicate. Francis tried this approach in her journal, writing out each of their parts, as though they were having a conversation.

She discovered that the voice that always called her stupid was afraid that if she made a mistake she would lose her job. She still hears the voice, but now considers it a call for help to which she responds with compassion and curiosity. When it starts calling her names, she asks what it is afraid of, thus defusing its previous power over her and sometimes gaining useful information.

The goal in these strategies is not to silence the Critic or Self-Hater, but to transform it by disbelieving its slander, facing the traumas that empower it and understanding what it really fears, as well as the needs from which it may spring. You may never silence the voice completely, but it is possible to lessen its impact, and find relief and healing.

A New Outlook Counseling Services provides therapy for those needing marriage counseling, relational therapy for couples, individuals with mental health issues, addictions to drugs and alcohol. We have 5 offices to serve Colorado.